A memorial service was held at his residence at Germantown Plantation, Germantown, Tenn.

David was born on April 20, 1920, in Newton, N.J., the son of Edward and Lilly Dillon. He grew up in Sturgis, Mich., graduating from Sturgis High School in 1938, where he was a three-sport star in football, basketball and baseball. After graduating from the University of Illinois in 1942, where he again lettered in three sports, he served in the Army Air Force during World War II receiving an honorable discharge in 1946.

After a short time in Coldwater, Mich., he returned to Sturgis where he served as a biology teacher and coach for the next 27 years before concluding his career at Worthington Christian High School, Columbus, Ohio. His 38 year career culminated with his induction into the Michigan and Ohio High School Coaches Association Halls of Fame recognizing a basketball career in which he recorded 454 victories.

He is survived by his high school sweetheart and love of his life, Mary Marie (Freeland) to whom he was married for 67 years. The Dillons founded the Bair Lake Bible Camp in Jones, Mich., a Christian camp attended by more than 300,000 young people over the past 51 years.

He was preceded in death by his brothers, James and Adolph.

His life was clearly known by his dedication and service to Jesus Christ as reflected by his work at the Sturgis Bible Chapel, First Baptist Church (Troy, Ohio) and Grace Chapel (St. Petersburg, Fla.) Memorial contributions may be made to Bair Lake Bible Camp, 12500 Prang Street, Jones, MI 49061. 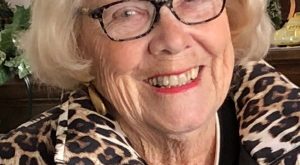 Elizabeth Osborn Childress, age 92, of Three Rivers, went to be with her Lord and …