David Wayne Frays, age 76, of Centreville, passed away Monday, January 31, 2011 at Three Rivers Health. He was born in Sturgis, on December 28, 1934,  a son of  Arthur and Velma (Fry) Frays. David attended Centreville schools. On June 27, 1954 he married Johnlynne Yvonne Sams in Centreville. They made their home in Centreville for all but the time spent in Germany during his tour of duty with the US Army, where he served as a Paratrooper with the 11th Airborn Division.
David worked as a pressman at Sturgis Newport Business Forms for 23 years and at Centreville Public Schools for 2 1/2 years as bus mechanic and driver. He also worked for Adams Excavating for 2 1/2 years and later retired from General Motors in Three Rivers after 17 1/2 years. He enjoyed gardening, bowling, camping and cherished spending time with his family. David faithfully served as Elder, Treasurer and Usher at St. Paul’s Lutheran Church in Centreville. He also served his community as Cub Master for the Centreville Cub Scouts and as a Centreville volunteer fireman.
Surviving are his wife Johnlynne Frays, Centreville, daughter  Karin Sue (Frays) Link of Kalamazoo, son  Steven (Abby) Frays of Vandalia, two grandchildren Amber Nicole (John) Brown, South Bend, IN, and Travis John Frays, Vandalia, one great grandchild, Caleb Jordan Brown, brothers  James Lloyd Frays of Sturgis, William Arthur (Lee) Frays of Mendon, several nieces, nephews, great nieces and nephews and great great nephews. He was preceded in death by his parents, grandparents, brother Robert Russell Frays, and sister Fay Irene (Frays) Gum.
Relatives and friends will be received Saturday 10 to 11 am at St. Paul’s Lutheran Church in Centreville, where a Memorial Service will follow at 11:00 a.m., with Pastor David Grimm officiating.  A private family interment of ashes will be held at the Prairie River Cemetery Centreville. In lieu of flowers, memorial contributions may be made to St. Paul’s Lutheran Church Furnace Fund. Online messages may be left for the family at www.eleyfuneralhomes.com. 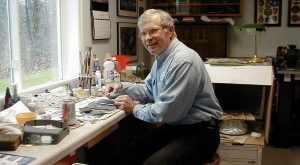