The city of Three Rivers and Three Rivers Community Schools have collaborated to develop a new traffic pattern at Andrews Elementary.

City officials said the section of South Street, between Douglas and Grant avenues, is now one-way in an eastbound direction only. In addition, parking is allowed only on the stretch of South Street adjacent to the school.

Also, there is now a four-way stop at the intersection of Grant Avenue, South Street and the school’s north side parking lot.

Furthermore, the city has now imposed no parking or stopping on the west side of Douglas.

The changes are in effect immediately. 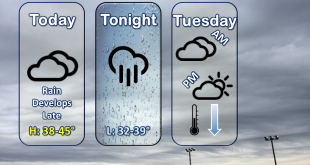 It will remain cloudy today as a storm system approaches the Upper Great Lakes today. …