Two people were charged with drug-related offenses following the discovery of methamphetamine earlier this week at a residence in Sturgis.

According to the Sturgis Police Department, officers were called to the 600 block of North Fourth Street in response to a tip regarding a fugitive from justice.

Upon arrival, officers searched the residence and noticed a recently active methamphetamine lab and a finished quantity of meth.

Police arrested a 19-year-old woman and 23-year-old man, both from Sturgis. The two were charged with operating and maintaining a meth lab, and possession of meth.

A third person, a 46-year-old Sturgis woman, was arrested on two felony warrants. 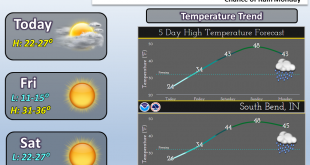 It’ll be warmer this weekend

Today will be cold, but it will be trending warmer towards the upper 40s by …