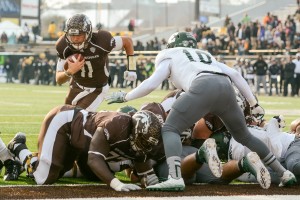 It took only 12 seconds for the Western Michigan Broncos to take the lead in their gridiron contest against cross-state rival Eastern Michigan as Darius Phillips returned the opening kick 93 yards for a touchdown. The Broncos poured it on after that amassing a 51-7 win. Zach Terrell goes over on a one-yard QB sneak in the second half as the WMU team improved its record to 7-3 on the season.