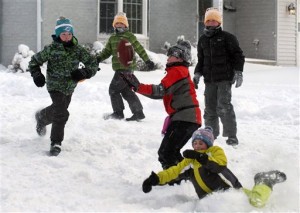 This winter’s icy grip has some in the Michigan Legislature arguing once again that the state should allow schools more than six days for closures before they must make up the time.

Schools are required by state law to provide at least 175 days of instruction each school year. Schools can be closed for up to six days, or the equivalent number of hours, for various reasons. Usually, that time missed is for weather-related reasons, according to the state Department of Education.

If a school misses more than those six days, it must make up time to receive its full state funding.

Harsh winters in recent years have pushed many schools over that six-day limit, though. Michigan’s 852 school districts missed an average of 9.5 school days in the 2013-2014 school year because of a winter that included record amounts of snowfall in parts of the state.

Bill DiSessa, spokesman for the Department of Education, said this winter is shaping up to be rough as well, but the department will not know for sure how many days schools across the state were closed until reports are filed at the end of the school year.

Initial reports indicate many school districts have already closed for at least six days and not always due to snow.

If some legislators have their way, the six-day limit on closings will be increased to nine. A bill introduced this month by Rep. Phil Potvin, R-Cadillac, would do just that.

Potvin said that since 180 days of instruction time will be required starting with the 2016-17 school year, it makes sense to keep the allowance for school closures proportional. Adding days to the end of the school year can interfere with planned vacations, and students may feel less inclined to pay attention in school during summer, he added.

“It’s a common sense piece that should fit right into the safety of our children and all involved,” he said.

Associations of school professionals in the state expressed mixed feelings about the proposal, however.

Paul Liabenow, executive director of the Michigan Elementary and Middle School Principals Association, said that missing days and extending the school year can indeed cause challenges for planning, costs, and vacations, but other factors need to be considered.

“The challenge for principals is that they need class time and direct instruction time with students in order to meet standards and benchmarks and provide quality education time so students can master the skill and content required,” Liabenow said. “There seems to be a bit of a divide between making up days beyond six and at the same time trying to support adequate time for teachers to provide direct instruction.”

Michigan Association of School Administrators spokeswoman Linda Wacyk said the group has “consistently cautioned lawmakers that we need as many instructional days as we can to be competitive.”

“We would be very cautious about any measure that removes more instructional days,” she said.

Potvin introduced a similar bill last year in the House, but it never made it out of committee.

In May 2013, Gov. Rick Snyder signed a bill, introduced by Potvin, allowing for extending the school day rather than adding extra days for the 2012-13 school year.

State Superintendent Mike Flanagan has come out against that as a permanent approach, though.

“Adding a few minutes on at the end of each remaining day will not result in added learning by the students, which should be the goal of school,” he said.  (AP)