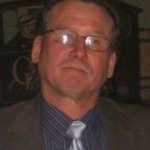 Gordon Bradley Booz, age 63, of Marcellus, passed away unexpectedly on Sunday, December 25, 2016.
He was born July 1, 1953, the son of Gordon and Curlene Booz.
He served in the U.S. Army. Brad received his Associates Degree from Southwest Michigan College and then went on to become the Assistant Store Director for Meijers in Three Rivers.
He was a car enthusiast, specifically Porsche’s, not only did he enjoy rebuilding them, he raced them. Spending the weekend at Gingerman Race Track was a favorite pastime that he and Tammy enjoyed. Brad loved his daughters & grandchildren and watching football on Saturdays with them. He enjoyed being outdoors hunting and fishing. Brad could be found walking around town on a daily basis, waving to passing motorist.
He is survived by two daughters, Cheri (Justin) Norton of Kalamazoo, and Breanna Booz of Cincinnati; three granddaughters Jordon Parker and Hannah and Grace Norton; one grandson Rhys Norton and step-daughters Tiffany & Brittany Snow; his significant other, Tammy Stickney-Booz; one sister, Sue Booz-Anderson in Bradenton, FL and one brother Jeff Booz of Anderson, South Carolina. He was preceded in death by his parents, two brothers and one sister.
The family will receive friends from 4 to 6 PM Friday, December 30, 2016 in the Mater-Ralston Funeral Home, Marcellus. Memorial services will be held at 11 AM , Saturday, December 31, 2016 at the funeral home. Memorials may be directed to Cass County Animal Shelter.
Online condolences may be left at www.materralstonfuneralhome.com