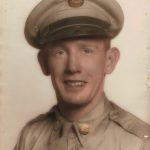 Lewis Junior Shears, 86, Centreville, passed away Sunday, December 18, 2016 at his home. He was born in Fawn River, on July 21, 1930, a son of Lewis Ray and Sylvia Amanda (Fish) Shears. He attended Centreville Schools. Junior served in the U.S. Army from 1951-1953 during the Korean War. On January 15, 1954, he married Margaret Young in Centreville. She preceded him in death on October 8, 2016. His father, Lewis Ray, founded Shears Saw Mill in 1949, where Junior worked until retiring in 2000. Junior founded Shears Wrecker Service in 1954, where he was currently working. He enjoyed camping, mushrooming, sailing, and cycle riding. He was a former member of the Mendon VFW.

Cremation has taken place. Relatives and friends will be received Friday, December 30 from 3-5 at Centreville United Methodist Church where a Memorial service will be held at 5pm. Pastor Emily Slavicek will officiate. Interment will be in Prairie River Cemetery at a later date. Memorial contributions may be made to St. Joseph County Animal Rescue Fund. Arrangements were entrusted to Eley Funeral Home, Centreville. Online messages may be left for the family at www.eleyfuneralhomes.com.Eley Funeral Homes, Inc.