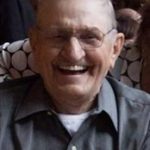 Harold Richard Hicks, age 81, passed away on Wednesday, January 18, 2017. Dick was born in Constantine on April 3, 1935 to the late Harry and Hazel (Brenner) Hicks. Shortly after graduation from high school he enlisted in the U.S. Navy and served honorably until his discharge in 1958. Dick was known for his sense of humor and ability to make friends with anybody. He truly knew no stranger. Dick retired from Fisher Body. He enjoyed fishing and golfing and made numerous trips to the casino with his wife. Dick was kind and loved by all. He was a family man, always putting their needs first and favored his grandchildren the most. On August 31, 1958 he married the love of his life, the former Karen D. Milhollin. In addition to Karen, Dick is survived by his children, Mark (Rhonda) Hicks and Shelly (Dr. Wallace) Broadbent; his beloved grandchildren, Meagan and Austin Hicks, Jamie (Trevor) Hause, Parker Williams and Walker Broadbent; great-granddaughter, Gracie Hicks; siblings, Phyllis (Glenn) Cook, Forest “Bill” Hicks, Mary Jo (Dean) Reames, Ted (Sue) Hicks, Don (Lois) Hicks and Linda (Donald) Leister; many nieces, nephews, extended family members and countless friends. He was preceded in death by his brothers, Junior, Paul, Chuck and Larry.
A memorial service to celebrate Dick’s life will be held at Hohner Funeral Home on Tuesday, January 24, 2017 at 1:00 PM. A time of visitation will take place one hour prior to the service and burial will follow at Moorepark Cemetery.