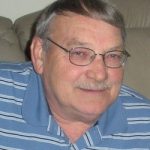 Harold F. Snyder, Junior, 68, of Three Rivers, and formerly of Goshen, passed away on Thursday, January 12, 2017 at his home.  He had struggled with heart failure the past eight years.

On July 1, 2000, he married June (Clark) Snyder in Three Rivers and she survives.

Junior was a 1966 graduate of New Paris High School.

He was preceded in death by his parents and son, Gregory Alan Snyder.

Burial will be in Yellow Creek Cemetery, Goshen.