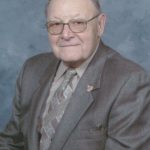 John W. Yearling, age 94, passed away at Bowman Place in Three Rivers on Friday, April 14, 2017. John was born on August 10, 1922 in Centreville, to Harry and Blanche M. (Worthington) Yearling. He was raised in Centreville and graduated from Centreville High School in 1940. He married Doris Hagen on June 30, 1941. She predeceased him in March 2004. John and Doris moved to Three Rivers in the early 1950’s.

John served in the U.S. Navy during World War II. He was elected honor man of his company while at the Great Lakes Naval Training Center. He attended engineering schools in Chicago, New York, and Seattle. John was an Engineering Petty Officer aboard two destroyers during the War.

For twenty-five years John was treasurer and general manager of Three Rivers Builders. He left that position to become Vice President and Chief Loan Officer of Three Rivers Savings & Loan from which he retired in 1985.

John enjoyed hunting, fishing, golfing, vegetable gardening, and travelling. Doris and John travelled extensively in the United States and the world. He also looked forward to his annual Canadian fishing trip with his son, Jerry and friends.

At John’s request, cremation has taken place. The family will receive friends from 6:00 p.m. – 8:00 p.m. on Friday, April 21st at the Hohner Funeral Home on Arnold St in Three Rivers. A memorial service will be held on Saturday April 22 at 11 a.m. at St. Peter’s Evangelical Lutheran Church on Arnold St. in Three Rivers with family greeting friends at 10:00 a.m. Military honors under the auspices of the American Legion Hice-Shutes Post will be held immediately following the service. Internment of the ashes will be at Prairie River Cemetery in Centreville.