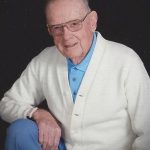 Edward George Clementz, age 88, of Las Vegas, formerly of Constantine, died December 6, 2017 in Las Vegas. He was born September 27, 1929 the oldest son of Robert E & Luvetta B (Daniels) Clementz. Ed graduated from White Pigeon High School, where he played on the basketball and baseball teams. He served in the United States Army from 1951 to 1953. On January 27, 1951, he married Charlene M. Hamilton at Messiah Lutheran Church, Constantine. She preceded him in death in 2013. They enjoyed 62½ years together, traveling throughout the US, including a trip to Hawaii and wintering in Las Vegas and Arizona.

He was a member of Messiah Lutheran Church Constantine, serving on Church Council, Building Committee, assisted with Men’s Breakfast for Easter and other Church celebrations. Ed was employed at the Constantine Creamery for 44 years retiring in 1996. He was a Life Time Member and past Commander of Constantine American Legion, ran bingo games, assisted with the boat races, marched in Memorial Day and 4th of July Parades as color and honor guard. Ed assisted in many military funerals and participated as a color guard for the Constantine Falcon Football Games.

He served as Assistant Fire Chief, and volunteer fireman for over 20 years, and helped with numerous fish fries and fundraisers for the firetrucks and rescue squad. Ed was an avid U of M fan, Constantine Falcon fan and honorary Wickenburg AZ Wranglers fan.

After selling his home in Constantine he relocated to Las Vegas to live with his daughter and son-in-law, summer of 2014. He enjoyed the weather and trips around CA, AZ, and NV. Special thanks to his son-in-law Doug for being Ed’s caretaker for past 18 months.

He was preceded in death by his parents, wife Charlene, grandson Matthew Rogers, and brother Donald Clementz.