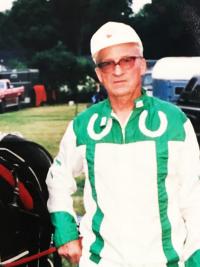 James D. “Jumbo” Truckey, age 84, of Mendon, died Monday, June 25, 2018 at the farm on Heimbach Road. The third son of Joseph P. and Eva (Parker) Truckey, Jim was born and raised in Mendon, graduating from Mendon High School with the class of 1951 where he pitched on the Varsity baseball team, and also worked for hire on local farms and with his father in concrete work. Following graduation, Jim trained as a bricklayer’s apprentice before enlisting in the US Army where he served from 1953  to 1956. His duties in the Army included concrete work and he also played on the Army’s baseball team as well. Jim was stationed in Sault Ste. Marie during his enlistment, where he met and married Audrey Hoffman in 1957. They were later divorced. He was married to Joan (Qualkenbush) Lowery in 1993. He continued to work as a bricklayer for the remainder of his life, taking great pride in the artwork he created with a mason’s trowel. Jim went on to work for General Motors Hydro-Matic Division in Three Rivers from 1980- to 1994. “Jumbo” loved animals of all kinds, especially dogs and horses. His early retirement years were spent Sulky horse racing at the Fairgrounds and in later years, he visited the local Dog Shelter weekly to aid in finding forever homes for stray or abandoned dogs. Following his service in the Army, he became a member of the American Legion.

The family will receive friends from 2 to 4 and 6 to 8 PM Friday at the Eickhoff Funeral Home in Mendon. Memorial services will be 12 noon of Saturday, June 30, 2018 at the funeral home with Deacon Dave Guido of St. Edward Catholic Church officiating. A private interment of ashes will take place at a later time. It is suggested that memorials be directed to the St. Joseph County Animal Shelter. Condolences may be expressed to the family online at www.eickhofffuneralhome.com