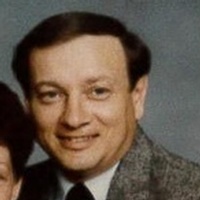 David Nelson Alleshouse, age 75, of Mendon, went to be with the Lord on Monday, July 2, 2018 at his home surrounded by his family. He was born in Sturgis on March 8, 1943 the son of Nelson J. and Merna Mae (Hart) Alleshouse. David graduated from Battle Creek Central High School in 1961 where he was active in sports and excelled in baseball. It was at a baseball game that he met his future wife, Patti Wagner, and they were married on Oct. 5, 1963 in St. Paul Lutheran Church in Colon. They made their home in Mendon where David worked at the Haas Corporation for 19 years. He later went to work at Hydra-Matic in Three Rivers and retired from AAM. He was a member of UAW Local 2093, and the National Rifle Association. He enjoyed target shooting and was a member of the St. Joseph County Conservation Club.

David is survived by his wife, Patti; three children, Jeffrey D. Alleshouse and Marla Leighton both of Mendon and Judi (Steve) Shutes of Three Rivers; six grandchildren, Dan, Drew, and Sam Shutes, Megann and McKenna Leighton, and Courtney Alleshouse; a brother, Dennis (Diane) Alleshouse of Battle Creek; niece, Amy Alleshouse; several in laws; and his cherished church family at St. Paul’s in Colon. He was preceded in death by his parents; son in law, Kevin Leighton; sister in law, Nancy Cook; and nephew, Eric Alleshouse.

The family will receive friends from 2 to 5 PM Sunday at the Eickhoff Funeral Home in Mendon. Funeral services will be 11 AM Monday, July 9, 2018 at St. Paul Lutheran Church in Colon with Rev. David Grimm officiating. Burial will be in Mendon Cemetery. It is suggested that memorials be directed to either St. Paul Lutheran Church, or to Hospice Care of Southwest Michigan. Condolences may be expressed to the family online at www.eickhofffuneralhome.com