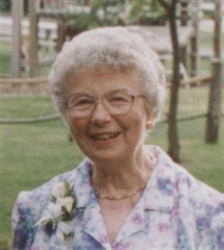 Gladys L. Rose, age 97, of Three Rivers, passed away peacefully on Thursday, July 26, 2018 with her step-daughter by her side. Gladys was born on May 4, 1921 in Brighton, England (Sussex County), the daughter of the late Albert and May (Thomas) Copestake. Gladys was baptized as an infant and later confirmed in her early teens in the Church of England.

During World War II, Gladys was employed in a government military canteen for two years, and later in an aircraft defense plant for four years. During this time Gladys met her future husband, Boyd B. Smith, a Master Sergeant in the U.S. Army. After the war, Gladys came to the U.S. and married Boyd at the Methodist Episcopal Church in Centreville.

Gladys assisted Boyd at Park Community School and was later employed as a library clerk in the Three River High School Library. Boyd and Gladys joined the National Grange at Parkville and worked at the annual Centreville Fair. Gladys also served on the Park Township Election and School Election Boards.

In 1973 Gladys began working for the Three Rivers Public Library, retiring in 1978. Gladys then married C. Eugene Rose on May 11, 1983. Together they spent many happy years traveling, including overseas trips and enjoying life.

Gladys resided happily in her Buckhorn Road home and made many friends throughout the years through her involvement in the community.

Gladys was preceded in death by her parents, two husbands, Boyd Smith and Eugene Rose; one step-son, James Rose; one step-daughter, Judith Rambadt; and one special brother, Alan Copestake.

The family will receive friends from 10:00 a.m. until the time of services at 11:00 a.m. on Tuesday, July 31, 2018 at the Hohner Funeral Home with Pastor Bud Granger officiating. Interment will be held at Leonidas Cemetery.

Memorials may be donated to the Bowman Place or Heartland Hospice of Three Rivers. Envelopes available at the funeral home. Online condolences may be shared at www.hohnerfh.com.