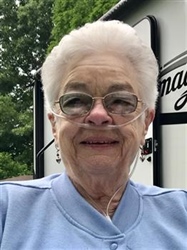 Myrtle Eileen Butler was born June 10, 1927 in Silver Lake, Indiana to Percy A. and Florence (Eiler) Petgen. She was the fourth child in a family of 5 daughters and 1 son.

At an early age her mother taught her to sew and her father introduced her to auto mechanics.  She graduated from high school in Bristol, Indiana. She met and later married Floyd William (Bill) Rentfrow May 19, 1946. From that marriage came 3 children Dianna, Bill Jr., and Jerry.  The family lived on the St. Joseph River in Constantine in a home built by Bill Sr.  Myrtle helped to support the family working as a cashier, bus driver for Constantine Schools and as librarian and an audio/visual technician for the school.

When her husband Bill died in September 1962, Myrtle married David Butler, a teacher with 3 children of his own. With Myrtle’s three, they became a family of 8. The children soon grew up and out, and Myrtle and Dave bought a hobby farm in Three Rivers. They enjoyed farming, gardening and raising a few head of cattle. She enjoyed cooking and canning, her sewing, playing card games and helping others.  She continued to work as a librarian now at the Three Rivers Public Library. After Dave passed in 1982, Myrtle moved into the town of Three Rivers and continued working at the library until retiring in 2005. She enjoyed traveling with and attending various functions at Commission on Aging. She served on the Three Rivers Library Board until this year when declining health forced her to step down.

Myrtle passed on Saturday, August 18, 2018 at the Bowman Place in Three Rivers where she had resided for 4 months.   She was preceded in death by sisters Edna, Calvina, Ellen and Frances; a brother Maurice; husbands Bill Rentfrow and Dave Butler, a daughter Dianna (Rentfrow) Proctor and son-in-law Wayne Proctor. Surviving are sons Bill (Teresa) Rentfrow of Three Rivers and Jerry (Anne) Rentfrow of Mansfield, Ohio, seven grandchildren and several great-grandchildren.

Memorials made in Myrtle’s memory may be made out to the Three Rivers Fire Department and Emergency Medical Service. Envelopes are available at Hohner Funeral Home.