On September 15, 1950, Ilene married Marlan J. Benthin in Schoolcraft. Marlan passed away November 13, 2010. Together they were married for 60 years and had two sons: Ronald G. (Carol) Benthin of Marcellus and Donald G. (Deanna) Benthin of Schoolcraft, who survive.

Ilene graduated from Union City High School in 1947 before moving to Marcellus in 1954. She was a member of Edwards Corners Bible Church. Ilene loved camping , tending to her flower garden, and spending time on the farm with her family.

Ilene is preceded in death by; both loving parents, one sister, and four brothers.

The family would like to welcome friends for a memorial visitation on January 15, 2019 from 5:00 to 7:00 PM at Mater-Ralston Funeral Home, Marcellus. A private burial of cremains will be at Howardsville Cemetery at a later date. Memorial donations may be directed to Cancer Center of Donor’s Choice. Online condolences may be left at www.materralstonfuneralhome.com 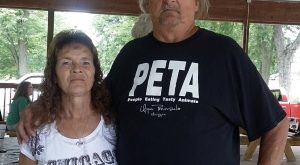