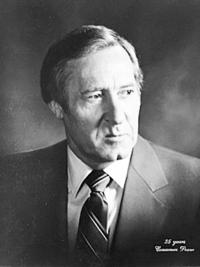 George William Fish, age 89, passed away in his family home on Saturday, Feb. 9, 2019. Fish, known as “Bill” to his friends and family, was born in Hillsdale Township, Mich. on Sept. 28, 1929 to Edward and Gladys Fish. He attended high school in Three Rivers, fand served in the Army Reserves after graduating. An Army veteran, George William served in the Korean Conflict as a Forward Observer from 1949-1951. After returning, he worked for General Telephone, where he met his future wife Geraldine Jajo, whom he married in 1954.
Beginning in 1953, he attended Michigan Tech in Houghton on his GI bill, where he studied Electrical Engineering. Upon graduation, he was employed by Consumers Power Company, working in Jackson, Saginaw, and Traverse City,  where he was an Operations and Management Superintendent of Electrical Energy. He retired from Consumers Energy, known as Consumers Power at that time, in 1985.
Bill loved sports, especially golf, hunting, fishing, hockey, and hiking. He was also an avid reader — always had a book nearby — and enjoyed many hobbies like woodcarving, making beautifully detailed waterfowl, darkroom photography, and card games—especially cribbage. Active in school plays and singing quartets as a young man, he had a beautiful singing voice and could often be heard singing around the house and in the shower.
He was preceded in death by his parents Edward and Gladys, his brothers Hugh and Dale, and his first born son, Craig.
He is survived by his wife of 64 years, Gerri; his sister, Ruth (Ed) Sinner of Wasilla, Alaska, and his sister-in-law June Fish of Diamondale, Mich. Also surviving are his remaining four children, Brian, Robert, and Donald (Linda Fish), Karin (Vern Strassburg), and Kimberly Fish of Enumclaw, Wash., (Craig’s widow). He also has six grandchildren, Kristopher, Jackson, Jacob, Katie, Molly, and Ben and many nieces and nephews.
Special thanks to Dr. Russ VanHozen and InTeliCare Health Services and Hospice Care, with special affection for Theresa.
A Memorial Service is planned for the spring with a date and location yet to be determined.
In lieu of a donation to a large organization, the family wishes you honor Bill by doing something good for another person or individual.
The family is being cared for by Reynolds Jonkhoff Funeral Homes and Cremation Services.