Thelma E. Fiebelkorn, age 87, of Burr Oak, passed away Wednesday morning, May 15, 2019, at Thurston Woods Village in Sturgis.
She was born Feb. 4, 1932, in Sturgis, a daughter of the late Clarence and Pauline (Maxwell) Maystead.
Thelma resided most of her life in the Burr Oak area and was a graduate of Burr Oak High School with the class of 1950.
On Sept. 18, 1953, she married Delbert O. Fiebelkorn in Burr Oak. He preceded her in death Oct. 13, 1996.
Thelma’s working life began in the offices of the Kirsch Company in Sturgis where she worked until joining the office staff at Tube Fabricators in Burr Oak, where she was employed for many years until her retirement. In retirement, she worked at the village hall in Burr Oak and also served the as village treasurer for several years.
She was a member of Burr Oak Mother’s Club. She and Delbert loved to polka. Thelma enjoyed playing cards and traveling. She traveled throughout the United States, Canada and Europe.
She is survived by two sons, Gary (Robin) Fiebelkorn of Burr Oak and Wayne (Beata) Fiebelkorn of Schoolcraft; four grandchildren, Max Fiebelkorn, Annie Fiebelkorn, both of Schoolcraft, Gene (Jenessa) Smith of East LeRoy and Corey (Jen) Smith of Texas Corners; two great-granddaughters, Jada and Jaris Smith; two sisters, Alice Verspelt of Sturgis and Marlelee Hawver of Centreville; and several nieces and nephews.
She was preceded in death by her parents; her husband; a daughter, Beth Fiebelkorn; a son, Dennis Fiebelkorn; and a brother, Allen Maystead.
In accordance with her wishes, cremation has taken place. The family will receive friends from 12 to 12:45 p.m. Wednesday at Hackman Chapel of Hackman Family Funeral Homes, 114 S. Nottawa St., Sturgis. A memorial service celebrating the life of Thelma E. Fiebelkorn will begin at 1 p.m. Wednesday at the funeral home. The Rev. George Milliman of Burr Oak Missionary Church will officiate. A graveside committal will follow the service at Burr Oak Cemetery in Burr Oak.
Her obituary is also at www.hackmanfamilyfuneralhomes.com, where personal messages of support may be left for the family. 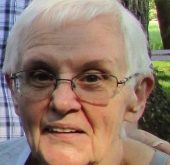