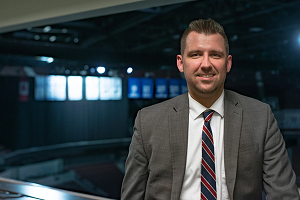 The Kalamazoo Wings have named John Peterson as their new Broadcaster and Director of Public Relations.

Peterson replaces Issac Berkey, who after one season behind the microphone, left the organization to pursue an opportunity outside of hockey.

Entering his 11th season in the broadcast booth, Peterson, a native of Andover, Minnesota,  is familiar with the ECHL and the K-Wings. After starting his broadcasting career at a small-town country music station, where he also called various sports, including hockey, for Roseau High School, Peterson moved on to calling games for the NAHL Austin Bruins.  In 2015, Peterson was hired by the Evansville IceMen of the ECHL, which ultimately turned out to be the IceMen’s final season in the league. The team relocated to Jacksonville, FL following a year hiatus. Peterson, meanwhile, moved on to Tulsa, OK to become the broadcaster for the ECHL Tulsa Oilers.   Peterson remained with the Oilers for three seasons, before coming to Kalamazoo. This season will be his fifth in the ECHL.

Before beginning high school, Peterson moved to the eastern suburbs of St. Paul, MN and attended  Stillwater Area High School. Following high school, Peterson enrolled at the Walter Cronkite School of Journalism at Arizona State University.  During that time is where he got the chance to try play-by-play broadcasting for the Sun Devils basketball, football, and baseball teams for the campus radio station.  Peterson was named as Sports Director at the station during his senior year and started calling games for the ASU club hockey team.

Peterson lists several broadcasters as his idols, including Gary Thorne from ESPN and Frank Mazzocco, who provided the TV play-by-play for the University of Minnesota hockey team.

“Rick Jeanneret, the longtime voice of the Buffalo Sabres, whose passion for the game is incomparable; and of course, Mike Emrick, the gold standard for hockey broadcasting,” Peterson added.

“As I’ve gone down this path, I’ve learned from and shared ideas with many of my peers at every level, while staying true to my style.”

Peterson says that he is not “necessarily a catchphrase guy while calling games, but he points out that fans will see some trends as they listen to him.

“I’m sure there are habits and consistencies to my broadcast that fans will pick up. I’ve always called every game “in the moment”, with genuine excitement for what’s happening each and every night, Peterson said.  “Sometimes catchphrases can take away from that. With that being said, I’m a big fan of certain broadcasters like Pittsburgh’s Mike Lange, who are notorious for their catchphrases.”

Peterson is excited about making the move to Kalamazoo and the organizations reputation is a big reason he applied for the job.

“ Several factors led me to Kalamazoo and applying for the job,” Peterson said. “I’ve heard great things about the organization from the top on down.  Plus, from everything I’d heard, I viewed this opportunity with the K-Wings as an opportunity to succeed and grow in my career.”

Peterson also points out that his wife is from Michigan and has family on both sides of the state, which was an important factor in their decision.

With the K-Wings just coming off their 45th Anniversary season, Peterson is thrilled to be a part of an organization with such deep roots.

“I’m all about history, and love to learn about the rich history of K-Wings hockey entering Year 46,” Peterson noted.

“In my first four seasons in the ECHL, I grew fond of visiting Kalamazoo and Wings Event Center as a visitor and saw how much the K-Wings embraced the community and valued the stamp so many have made throughout the team’s history here. I’m thrilled to be a small part of that history going forward and look forward to meeting many of those who’ve been a part of it for the first 45 years, Peterson said.”

While he is still getting used to his new surroundings, Peterson has been impressed with everything he has seen so far.

“In the short time I’ve been here, I can see why the K-Wings have been so highly regarded as a great organization to work for,” he said. “ I’m very grateful to work for owners like Bill and Rhonda, who have put so much back into this community and value every employee for what they bring to the team. I’m blown away by the awesome people I’ve met so far and get a chance to work with here, and I’m excited to meet many of the fans when the season gets going soon.”

K-Wings win third in a row