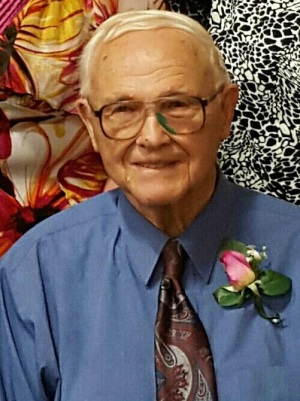 William Francis West, age 92, of rural Vicksburg, died Friday, Sept. 13, 2019 at his home. He was born in Olney, IL on Dec. 13, 1926 the son of Harley and Mattie (Delzell) West. After graduation from Athens High School he worked at the Oliver Plant in Battle Creek and for Wolf’s Feed and Grain in Athens. For many years he worked at Hydreco of Galesburg, and after retirement worked at the Felpausch Grocery in Vicksburg. Francis had been a member of the Wakeshma Community Church, the Chapman Memorial Church of the Nazarene, and West Leroy Bible Church. He was always busy, raising cows and sheep, fixing and repairing equipment, and collecting antiques. He was a representative for Dekalb Seed Corn, and enjoyed photography.

Francis was married to Margaret A. Loker on June 22, 1947. She survives along with 4 children, Linda (Lee) Crotser of Scotts, Mary Lou (Sal) Cali of Sturgis, Diane Blain of Portage, and Alan F. West of Sherwood; 10 grandchildren; 20 great-grandchildren; 2 great-great-grandchildren; a brother, Clifford (Sue) West of East LeRoy; nieces and nephews. He was preceded in death by his parents; 2 brothers, Eugene and Charles West; and a sister, Coyla Dornton.

The family will receive friends from 11 am to 12 noon on Thursday, Sept. 19, 2019 at the Chapman Memorial Church of the Nazarene, 7520 East U Avenue, Vicksburg, MI 49097. Funeral services will begin at 12 noon Thursday at the church with Pastor Dave Downs officiating. Following a luncheon at the church burial will take place in North Fulton Cemetery. It is suggested that memorial contributions be directed to Hospice Care of Southwest Michigan, 222 N. Kalamazoo Mall, Kalamazoo, MI 49007. Arrangements were by the Eickhoff Funeral Home of Mendon. Condolences may be expressed to the family at www.eickhofffuneralhome.com