Joshua P. Wickey, age 41, of Kalamazoo, passed away peacefully Friday, Sept. 6, 2019, at his home, surrounded by his beloved family.

Joshua, a son of Jeffery and Sharon (Sorko-Ram) Wickey, was born May 13, 1978, in Sturgis. Joshua lived most of his life in the Sturgis and Kalamazoo region, graduating from home school in 1996. Following completion of his home-schooling, Joshua continued on to Western Michigan University to achieve a Bachelor of Science and Mechanical Engineering Degree.

On April 7, 2007, Joshua married the love of his life, Rosanna Sookhai, on his family farm in Sturgis. Later that year, Aug. 25, Joshua and Rosanna were wed again in Rosanna’s home town of Toronto, Canada.

Joshua most recently worked at Zoetis in Kalamazoo in the mechanical engineering department as a process engineer.

Joshua loved his family, sharing the word of Jesus to others, music and playing guitar. He served as a chaplain at LaGrange County Jail and volunteered at a refuge for street kids in Mexico. Joshua and his family also are members of Lifespring Church in Kalamazoo.

He was preceded in death by a brother, Andrew Lin Wickey; and both sets of grandparents, Chris and Rebecca Wickey and Paul and Patricia Sorko-Ram.

The family received friends and family Monday, Sept. 9, 2019, at Grace Christian Fellowship in Sturgis. A funeral service celebrating the life of Joshua will be held at 10 a.m. Tuesday, Sept. 10, 2019, at the church, with services performed by Joshua’s father, Jeffery Wickey, and uncle Chris Wickey.

Online Ccondolences may be left for the family at Schipperfuneralhome.com. 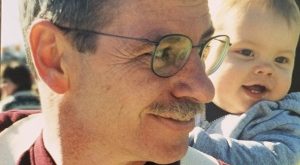