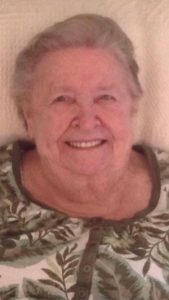 Harriet L. “Pat” Bacon, age 87, of Fulton, died Friday, Sept. 20, 2019 at Bronson Battle Creek Hospital. She was born in Fulton on March 25, 1932 the daughter one of ten children born to Jonathin D. and Effie May ((Huffman) Parsons, and attended Fulton Elementary School. She was married to Donald W. Bacon on June 25, 1949 in Hastings. Donald died in 2001. Pat had been employed as a Nurse’s Aid at the Kalamazoo County Rest Home and the Alamo Nursing Home. She enjoyed cooking for her family, and appreciated all kinds of music.

The family will receive friends from 5 to 7 pm Tuesday at the Eickhoff Funeral Home of Mendon. Funeral services will be at 1 pm Wednesday, Sept. 25, 2019 at the funeral home with Pastor Pat Clarey of the Country Christian Evangelical Free Church officiating. Burial will be in Fulton Cemetery. Contributions will be directed to the family. Memories and condolences may be shared at www.eickhofffuneralhome.com