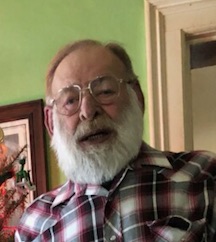 Gerald Lee Preston, age 77, of Sturgis, passed away Tuesday, December 3, 2019 at his home. Jerry was born in Three Rivers on January 26, 1942 a son of Kenneth Earl and Mary (Dalmon) Preston.

He graduated from Centreville High School in 1961. He later attended trade school for Ferrier Services at Olivet College. He was first married to Peggy Keith; they were later divorced. On November 24, 1978, he married Nancy “The Bride” Nicholas Caseman, and her four children, in Sturgis; she preceded him in death on August 24, 2015.

Jerry worked for Haas Corporation, was a custodial engineer for Centreville Schools, and lastly for Peterson Springs for over 20 years. He was also a successful blacksmith.

Jerry spent many years on the St. Joseph County Sheriffs Posse. He was a charter member of the Trailblazers 4-H club that was started by his father, and served as a 4-H leader. He held the position of Union President for the UAW while working for Peterson Springs, and was a lifelong member of the Loyal Order of the Moose. Jerry was an avid blood donor, donating many gallons throughout his lifetime. Jerry never missed the opportunity to share a story and a cold one, and was a lifetime supporter of Pabst Blue Ribbon. Jerry had a true love of horses but nothing was more important than family. He may have been a sports fan by default, but you could always find him in the stands cheering on his children and grandchildren.

He was preceded in death by his parents, wife, stepfather Robert Schrader, and brother-in-law John Ruden.

Relatives and friends will be received at Eley Funeral Home in Centreville, on Thursday from 2 to 4 and 6 to 8PM. Religious services will be held on Friday at 10AM at Centreville United Methodist Church with Pastor Michael Tollmer officiating. According to his wishes, cremation will then follow, and interment of ashes will occur at a later date in Prairie River Cemetery, Centreville.

Memorial contributions in honor Jerry can be given to the American Red Cross or to the St. Joseph County Mounted Division. Online condolences can be left for the family at www.eleyfuneralhomes.com.