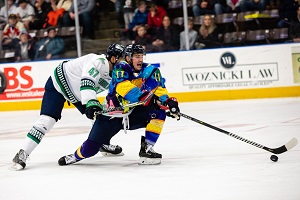 KALAMAZOO, MI – Playing only three games on home ice in the month of January, the Kalamazoo Wings (13-20-4-0) hoped to use the home-ice advantage and grab a few wins before the All-Star break and then hitting the road for a six-game road trip.

Unfortunately, the K-Wings managed to win only one of their three games this past week while at Wings Event Center.

On Wednesday, the K-Wings fell to the visiting Florida Everblades, a team they have not played since 2016, by a score of 6-3.  Justin Kovacs scored two power play goals and newcomer Austin Farley scored his first as a K-Wing in the loss.

The Wheeling Nailers came to town on Friday night to battle the K-Wings.  Luke Sandler started the scoring for the K-Wings early in the opening period as he netted his fifth of the season.  Zach Saar assisted on the goal. Wheeling would tie just over a minute later.

Regaining the lead minutes later, Ian Edmondson scored is second of the season to give the K-Wings a 2-1 lead.  However, the Nailers struck right back to tie the game shortly after the goal by Edmondson.

The score remained tied until the midway point of the second period when Kovacs scored his seventh of the season.  The Nailers came back to knot the score at 3-3 later in the period, but a goal by Eric Kattelus with just under a minute left gave the K-Wings a 4-3 lead heading into the final period.

Matt Iacopelli wasted little time to pad the K-Wings lead in the third period, scoring just 27 seconds into the frame to give the K-Wings a 5-3 advantage.  The Nailers kept it close by scoring a goal late in the period, but the K-Wings held on for the win.

Jake Hildebrand was in net for the K-Wings, stopping 32 of the 36 shots he faced.

The Everblades returned to Wings Event Center on Saturday night, which was also Spongebob Squarepants night.    Managing only one goal in the game, scored by Justin Taylor in the second period, the K-Wings fell to the Everblades by a score of 4-2.

Hitting the road for two games this weekend, the K-Wings will head to Oklahoma to take on the Tulsa Oilers.

*With their win over the Nailers on Friday, the K-Wings are 5-1-0 against Wheeling so far this season.

*Former K-Wing goaltender, Matiss Kivlenieks, who played in 8 games for the K-Wings last season, made his NHL debut on Sunday with the Columbus Blue Jackets.  Kivlenieks stopped 31 shots in the Blue Jackets 2-1 win over the New York Rangers.

*Justin Kovacs was a busy man this past week.  In three games, Kovacs scored three goals and added two assists.