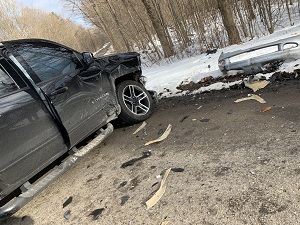 A Cassopolis man was injured after the vehicle he was driving was struck by another car this week in Cass County’s Volinia Township.

Sheriff Richard Behnke said 42-year-old A.J. High was driving east on Marcellus Highway when his car was struck by a vehicle traveling south on Decatur Road and failed to stop at the intersection.

The second vehicle was driven by Eric Nshimyumukiza, 33, of Granger, Ind.

High was transported to Lakeland St. John Hospital, though his condition was not indicated in a department media release.

Authorities said it does not appear alcohol or drugs contributed to the collision.

The Branch-Hillsdale-St. Joseph Community Health Agency is continuing its public service by issuing a daily …