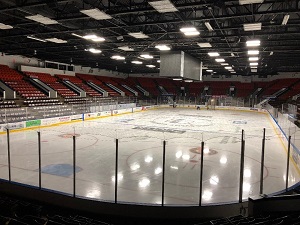 The ECHL and Kalamazoo Wings announced on Saturday that the remainder of the 2019-20 season has been canceled.  Earlier in the week, the league and team announced that the season was suspended due to the COVID-19 outbreak.

The K-Wings had eleven games remaining on the season, including six home games.  At the time of the cancellation, the K-Wings were battling to earn a berth in the ECHL Kelly Cup Playoffs.   After lounging in the cellar of the Central Division for the past several months, the K-Wings moved into fifth place, ten points behind the Indy Fuel for the final playoff spot.

Now, the playoffs won’t be happening and the Kelly Cup will not be awarded for the first time in the league’s 32 year history.

While the move to suspend and then cancel the remainder of the season weighed heavily on all involved, Toni Lentini Daniels, Director of Business Operations/Governor of the K-Wings knew it was the right thing to do.

“I completely understood the necessity to end the season,” Daniels said.  “It was a very sad moment for the entire K-Wings organization (and the ECHL) as we were having a great season in terms of attendance.  This is a venue that the community comes to for not only hockey but fun and new experiences with their family and friends.”

On a bright note, the K-Wings were one of only five teams in the ECHL to show a growth among their fan base for the season.  The K-Wings were up 281 fans per game, a number that would have increased had they been able to finish the season. Three of the remaining six games were either sellouts or close to being sold out, including the planned “Green Ice Weekend” that would have been played on March 13 and 14.

“We have worked strategically and diligently to ensure that we increase attendance year over year by creating affordable, exciting experiences,” Daniels said.  “For instance, setting the Guinness Book of World Record for the Largest LightSaber Battle will be one for the memory and record books with a sell out crowd!”

Since the cancellation announcement, the K-Wings staff have been working diligently on ticket refunds and other issues that have come up, including the well-being of the staff.

“We are still figuring all of this out,” Daniels said.. “It’s a minute by minute, hour by hour, day by day problem solving situation. There are several concerns, mainly about the employees who work at Wings Event Center and the K-Wings to ensure their safety and overall health.  Additionally, we want our fans and customers to stay healthy but also answer their questions much of which can be found on our Facebook Page or our website (kwings.com).”

Even with all the uncertainty, the push for the 2020-21 season continues.

“Yes, planning has been well underway for the 2020/21 season,” Daniels said.. “ We have a lot of exciting ideas to implement and we are looking forward to it!  With our season ending 6 games early our hope is that our fans will be even more eager come October for the Home Opener!”

It is Award Season for the Kalamazoo Wings

The Kalamazoo Wings announced their end of season awards.  The awards were voted on by …