An arraignment for St. Joseph County Prosecutor John McDonough, who was cited last week for driving while intoxicated, has been delayed until June.

McDonough was to appear in St. Joseph County 3B District Court today (Thursday) but court officials said the case has been assigned to Judge Vincent Westra of Kalamazoo County 8th District Court.

The new court date is June 11.

Kalamazoo County court officials said it is not known at this time if the proceeding will take place in person or through video conference.

McDonough, 40, was involved in a single-vehicle crash around 7 p.m. May 11 in the 17000 block of Lovers Lane in Lockport Township.

McDonough, who was also cited for having open intoxicants in the vehicle, was elected prosecutor in 2008, upsetting longtime incumbent Doug Fisher. 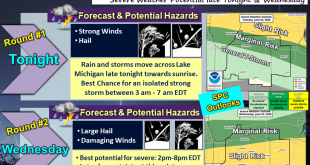