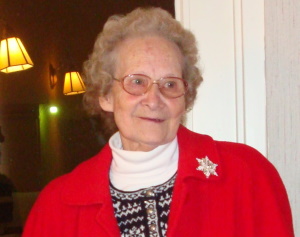 Barbara Louise Gibson, age 94, of Three Rivers, passed away on Friday, October 23, 2020 at Edgewood Health & Rehabilitation Facility. She was born on February 20, 1926 in Elkhart, the daughter of James H. and Dorothy E. (Sharkey) Rowe. She married Herbert G. Gibson June 15, 1946 in Elkhart, and they lived in Three Rivers since 1952, where they raised their six children.
Barbara worked for many years in the Three Rivers area as a housekeeper, for several businesses including Three Rivers Hospital. She enjoyed her gardening and crocheting, and spending time with her grandchildren and great grandchildren as they grew up.
Barbara was preceded in passing by her husband Herbert, her parents, and 2 brothers and 6 sisters.
Surviving to cherish her memory are daughters, Pamela Dechnik, Linda (Dave) Montcalm, and Jeanne (Mike) Stumpf, and by sons, James (Marlene) Gibson, Steve (Pat) Gibson, and Richard (Karen) Gibson. Also surviving, a sister Beverly and a brother Larry, plus 15 grandchildren, 15 great grandchildren and several great-great grandchildren.