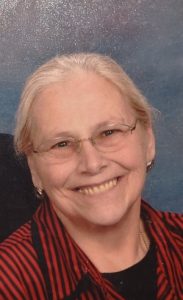 Margaret (Peg) Mary Connelly, age 73, of Constantine, passed away on Thursday, October 15, 2020, at her daughter’s home, in Kalamazoo.

Margaret was born in Pittsburgh on March 31, 1947. She is the daughter of James and Pauline (Novak) Raimar.  She graduated from Carrick High School, in Pittsburgh and attended Glen Oaks Community College.  On April 21, 1964, she married James Connelly.  Margaret was a very talented artist. She was most known for painting the murals throughout Constantine, most notably on the Harvey House and hardware store. Furthermore, she assisted in the design and painting of Christmas yard cards, that can be found all over the town. Margaret taught art classes at Glen Oaks Community College; gardened with food preservation/canning; and was involved with the COA, Girl and Boy Scouts, 4-H, and St. Joseph Catholic CCD. She mostly enjoyed painting animals, flowers, and nature scenery.

She was preceded in death by her parents; daughter, Karen Astling; and sister, Betty Oxnam.

According to her wishes, cremation has taken place.  A Christian mass (for family only due to COVID-19) will be held on Saturday, November 7th, 2020, at St. Joseph’s Catholic Church, in White Pigeon.  A memorial service will be held at a later date. The interment of ashes will take place at a later date in Fort Custer National Cemetery.

Memorial contributions can be given in Margaret’s honor to St. Joseph’s Catholic Church in White Pigeon.

Arrangements were entrusted to Eley Funeral Homes, of Constantine.  Online messages can be left for the family at www.eleyfuneralhomes.com.